This was originally posted on my professional blog.

America has experienced an ugly spotlight reversal with the eruption of popular discontent into violence in its own backyard. Just a few weeks ago, international media was buzzing with reports of ISIS steamrolling the Iraqi military and Russian-supported separatists in Ukraine shooting down passenger airlines. Now, the US squirms uncomfortably under international scrutiny of Ferguson, Missouri, where the shooting of a young black man by a white police officer has once again raised the specter of racism and police brutality.

Obviously, the incident itself is complicated. Eyewitnesses – who have given conflicting testimonies – are the only window into what happened, since there was no dashboard camera. The initial description of Michael Brown, the victim of the shooting, as a “gentle giant” about to start college clashed with video footage of him stealing a box of cigarillos from a convenience store. Commentators have drawn parallels with the case of Trayvon Martin, whose mother has now reached out to Brown’s mother. Peaceful protests have given way to violence and looting, reporters have been arrested, and witnesses have complained of excessive use of force by the police.

Social media, which played a major role in bringing media attention to Ferguson in the first place, has played host to the battleground of ideological responses to the incident. The primary complaint from conservatives is that the uprising in Ferguson, and the underlying racial tensions it has exposed, don’t deserve our consideration because some of the protesters have been looting and vandalizing stores…

…including a few gems that actually blame the community for the excessive force used against it. 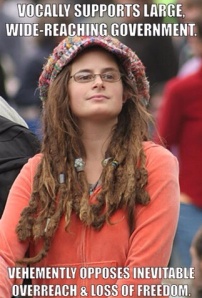 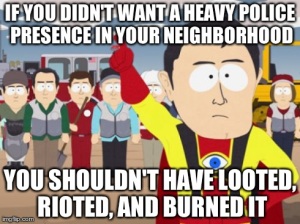 Meanwhile, people used the Twitter hastag #IfTheyGunnedMeDown to spar over which photos of Brown were used by traditional media (wearing a cap and gown vs. striking a “thug” pose) and post their own side-by-side pictures. Still others are expressing frustration at the fact that the vandalism and looting has been used as a straw man to distract from ongoing widespread racial profiling and policy brutality against blacks, including one refreshingly blunt protester at a rally in DC: 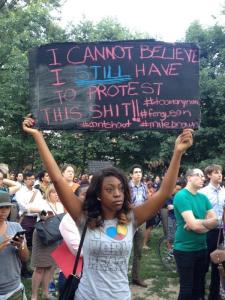 What has been the most interesting to me is the global shock and horror at the incident and resulting fallout. The international community sees what many Americans are apparently missing: that the protests and unrest in Ferguson are the manifestation of a minority group sick of being oppressed and ignored. The UN High Commissioner for Human Rights drew parallels to South African apartheid, while several countries have been using the situation to take shots at America’s own human rights record when we so often criticize other countries. One might expect Iran and Russia troll the US over civil unrest, but as one friend of mine pointed out on Facebook, “When Egypt calls you out for human rights abuses, YOU’RE DOING IT WRONG.”

American police brutality, and the unwillingness of many police departments to be held accountable for their actions, have also been focal points. What happened to Michael Brown will unfortunately always be shrouded in mystery, since the Ferguson police department apparently prioritizes riot gear and tear gas over cameras for officers or police cruisers. They also seemed to have forgotten the meaning of “free press,” as they arrested and harassed several reporters who were trying to cover the protests. Interestingly, Obama was quick to condemn the bullying of journalists “here in the United States of America,” despite his own administration’s secrecy and aggression toward the press, including prosecuting a journalist who refused to identify the source of an intelligence leak.

When everything is said and done, America doesn’t look so much like a shining beacon of democracy and human rights – we just kinda look like everybody else.