As the World Health Organization executive board met in January 2016, Médecins Sans Frontières (MSF) highlighted five diseases that had the potential to become epidemics this year.

The 5 epidemics to watch for this year are:

Cholera is the infection of the intestine caused due to the rod-shaped Vibrio cholerae. It spreads through water and food that has been contaminated by human feces. While in the US and other developed countries, it is deemed as a rare disease, but it is a huge issue in many parts of the developing world. In 2014 the WHO reported a 47% increase in the number of cholera cases compared to 2013. Cholera can be prevented by improving sanitation, especially by the provision of clean drinking water.

Measles, yet another infection that is considered rare in the US, is among the leading causes of death among children worldwide. It is a highly contagious disease caused by the measles virus. Measles vaccination is the most effective prevention method. There has been a 75% decrease in deaths due to measles between 2000 and 2013. 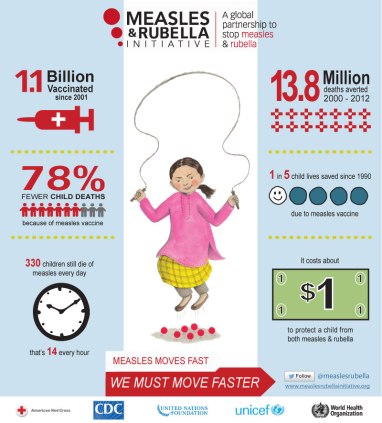 Malaria is caused by the plasmodium parasite and is transmitted from person to person by the female anopheles mosquito. Of more than 100 species of the malarial parasite, the most deadly is Plasmodium falciparum, which is also the most common in Africa. About 3.2 billion people are at risk for malaria, with young children and pregnant mothers being particularly vulnerable. There have been increased efforts in curbing this life-threatening disease. Malaria incidence fell by 37% globally between 2000 and 2015.

Meningitis, an inflammation of the protective linings (meninges) around the brain and spinal cord, is often caused by infection. Bacterial meningitis caused by Meningococcal meningitis affects more than 400 million people each year in the African meningitis belt that runs east-west from Senegal to Ethiopia. While the number of cases has been decreasing steadily (24,000 in 2010 to 11,500 in 2014), the most recent outbreak occurred in 2009 with over 80,000 cases in Nigeria and Niger.

Emerging and Re-emerging viruses and parasites have already been causing some serious worry among the health professionals. Who could forget the Ebola outbreak in 2015, and we are all already well aware of the Zika virus. But a few other infectious diseases that did not receive too much of a media coverage in the US this past year were outbreaks of dengue, Chikungunya, Middle Eastern Respiratory Syndrome. Visceral leishmaniasis,a parasitic infection that has been under control for so long, is also on the rise.

Dr. Rull said that “Current outbreak response strategies are failing the very people they are designed to help”. “If we don’t make significant changes, we will be doomed to repeat past mistakes, and must take responsibility for the consequences.”