Antibiotic resistance poses a serious threat to the gains we have made in curbing infectious diseases caused due to bacteria.Simply put, it is the bacteria’s way of putting up a fight to survive and persist.

To understand what antibiotic resistance is, let’s delve a little into the biology of these famed, overused drugs and into the history of how we got here.

The word antibiotics might elicit an image of Sir Alexander Fleming, and the famous story of the serendipitous discovery of penicillin in 1928, for which he shared a Nobel Prize with Howard Florey and Ernst Boris Chain. Some studies have even revealed traces of tetracycline in human skeletal remains from ancient Sudanese Nubia (350–550 CE) and femoral midshafts of the late Roman period skeletons from the Dakhleh Oasis, Egypt.

Unfortunately, the success of antibiotics as a chemotherapy agent, has also led to the misuse and overuse of these agents. We have moved away from using them judiciously and today, antibiotics are being used rampantly not just to treat infections in humans but to fatten animals that we intend to eat.

In an interview shortly after winning the Nobel Prize in 1945, Alexander Fleming said:

“The thoughtless person playing with penicillin treatment is morally responsible for the death of the man who succumbs to infection with the penicillin-resistant organism.” 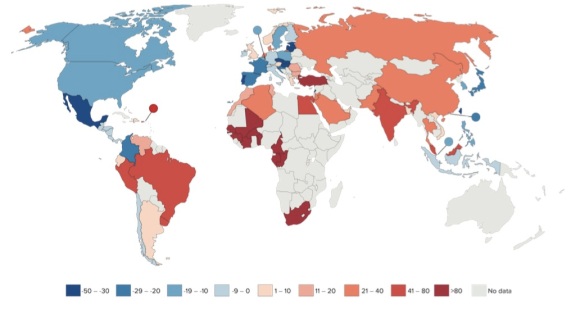 Percentage change in antibiotic consumption per capita 2000–2010*, by country

The State of World’s Antibiotics released in 2015 identified the different kinds of antibiotic resistant bacterial strains including Methicillin-resistant Staphylococcus aureus (MRSA) and Carbapenem-resistant Enterobacteriaceae. According to the WHO, in 2013, there were about 480 000 new cases of multidrug-resistant tuberculosis (MDR-TB) and extensively drug-resistant tuberculosis (XDR-TB) has been identified in about 100 countries. The treatment courses for MDR-TB is long and usually less effective, posing a greater threat to the progress that has been to curb TB.

The SWA report describes six strategies (listed below from the report) that nations can take to:

Resistance Map: A useful resource from CDDEP that you could use to explore antibiotic resistance trends, rates and antibiotic use by country, pathogens and much more.

We have to take smart, swift action to reduce unnecessary use or misuse of antibiotics and use them with caution.

2 thoughts on “A tale of resistance”