With less than a month till the U.S. Presidential election, UN High Commissioner for Human Rights Zeid Radd al Hussein has taken a stand against Donald Trump, calling him a threat to international affairs:

If Donald Trump is elected on the basis of what he has said already – and unless that changes – I think it is without any doubt that he would be dangerous from an international point of view.

The Economist might have a point. Trump has made numerous comments that indicate that neither health nor human rights will be prioritized in his administration’s foreign policy:

What I won’t do is take in two hundred thousand Syrians who could be ISIS. (Face the Nation, CBS – 2015)

This is reinforced by the unusual cadre of suspect world leaders (read: perpetrators of human rights abuses) that he has singled out for praise, including Kim Jong-eun, Saddam Hussein, and Vladimir Putin.

At the moment, Trump is all talk. However, should he be elected and even one of his portentous assertions be made manifest, both health and human rights – which in many cases are inextricably linked – will be imperiled. Here is a look at how Trump might influence health at home and abroad.

26,000 unreported sexual assaults in the military-only 238 convictions. What did these geniuses expect when they put men & women together?

What Trump’s tweet fails to grasp is that more than half of reported military sexual assault victims are men. 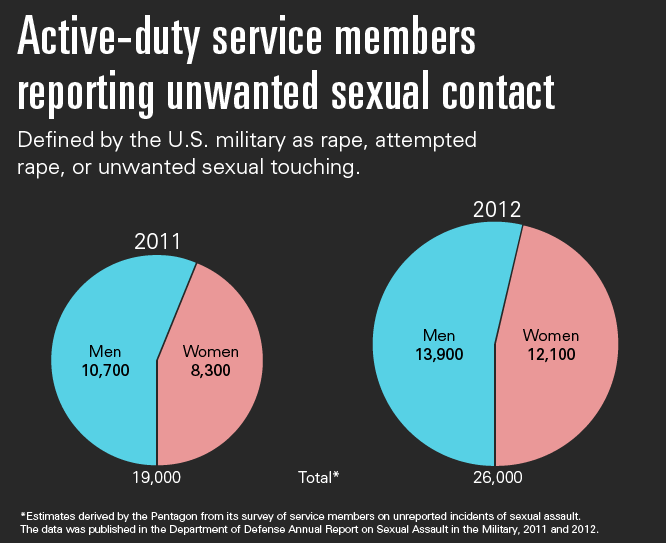 Like the perpetrators of these assaults, Trump struggles with issues of consent. Even if we ignore recently surfaced audio of Trump boasting about inappropriately grabbing women or comments made about women consciously and unconsciously flirting with him, Trump has a history of hiring men with dubious ideologies and records. His own private council and a top executive at The Trump Organization, Michael Cohen, recently stated that women cannot be raped by their husbands, in response to decades-old allegations by Trump’s first wife. Ahead of his September 26th presidential debate, Trump was advised by Roger Ailes, former Fox News chairman who was fired by the network amid sexual harassment allegations. As President, Trump would appoint more than 6,000 federal positions, including top officials for all federal agencies.

Reproductive rights
Abortion in the US was legalized in 1973, in part to reduce the public health toll of illegal abortions especially as they impacted low-income women. Shortly after legalization, deaths and hospitalizations due to unsafe abortion practices significantly decreased. However, access to abortion is constantly challenged in the States, through measures such as Texas’s recently-defeated HB2 and legislation that puts restrictions on the administration of medication abortion. Thirty-seven states require prescription of the dual dose by a licensed physician, while 19 others require that a licensed physician be physically present when the medications are taken. As the scope of reproductive rights grow slimmer, what American women need is a champion, not a leader whose basic understanding of female anatomy is that they bleed out of their “wherever.”

Trump (despite describing himself as “very pro-choice” when he flirted with a presidential run in 1999) appears to be prepared to encourage the erosion of this ever-embattled constitutional right: in a town hall meeting in March, he voiced his support for the criminalization of abortion and stated that women who seek them should face “some sort of punishment.” He quickly backed down from this extreme position in response to public backlash (even from those within his own party), but his potential ability to appoint up to four Supreme Court justices creates the specter of encroachment on women’s rights. At a time when reproductive choice is finally beginning to see some forward movement around the globe in countries such as Poland and the Philippines. If US law heads in that direction, it could embolden other countries to go the way of Northern Ireland.

Religious discrimination
Trump has taken a hard line on his views of the world’s Muslim population. Besides proposing a ban on Muslims entering the U.S., Trump suggested that all Muslim-Americans be tracked through a surveillance system. Many drew comparisons to Nazi Germany, but in an interview with George Stephanopoulos, Trump justified his proposal by saying it was no worse than the internment of Japanese-Americans under the purview of Franklin D. Roosevelt . A report by the Commission on Wartime Relocation and Internment of Civilians found the internment camps “were motivated largely by racial prejudice, wartime hysteria, and a failure of political leadership.”

War and war crimes in the Middle East
War is a guaranteed human rights catastrophe, and the devastation that armed conflict wreaks on public health infrastructure and health systems is myriad and far-reaching. In addition to the direct destruction of hospitals and killing, often directly and intentionally, of health workers, war and conflict can reverse decades of progress toward eradicating diseases – as evidenced by the recent reemergence of polio in conflict zones. US military activity has been responsible for much of this kind of damage in the Middle East. Iraq’s healthcare infrastructure may never fully recover from the first Gulf War in 1991 and the subsequent 2003 invasion. As it stands, nearly 97% of Iraqi families have no health insurance, and even if they do there are only 7.8 doctors per 10,000 patients, a rate miniscule in comparison to neighbors such as Jordan and Lebanon. Personal safety and security are the top reason physician recruitment and retention in this country is so difficult, according to Médecins sans Frontières (MSF). Additionally, Syria and Yemen are humanitarian tragedies due to ongoing American coalition-funded proxy wars.

Adding nuclear weapons to the mix hardly seems imaginable, but Trump seems to have a bit of a trigger finger when it comes to nuclear weapons. On a morning news show, Trump said that he would never rule out the use of nuclear weapons against ISIS, citing “unpredictability” as a central theme of his foreign policy agenda.

The candidate has also advocated the murder of terrorists’ families, which, as John Oliver helpfully reminds us, is a war crime:

Trump has indicated that he is willing to compel servicemen and women to do this and commit other war crimes, such as torture detainees:

They won’t refuse. They’re not going to refuse me. If I say do it, they’re going to do it.

These statements (and many more) have been made – in public fora and broadcasts – since Trump announced his presidential bid 485 days ago. The American voter can only speculate what other dubious position statements will emerge in the scant weeks leading up to election day. Is Trump a threat to global health and human rights? That is a personal call each voter will have to make on November 8th.