The focus of this year’s World No Tobacco Day on May 31st is the impact of tobacco on cardiovascular health. In 1967 the Surgeon General’s report definitively linked smoking to lung cancer and presented evidence that it causes cardiovascular problems. Despite all the evidence and outcry from health professionals, it was not until the 1990s when many countries around the world banned smoking in public places. There have been several policies including those deterring tobacco companies from advertising to younger age groups and forcing them to add warning labels on tobacco products. Despite all these efforts, tobacco still kills 7 million people each year and tobacco use (and secondhand smoke) is responsible for nearly 12% of all deaths globally due to cardiovascular diseases (CVDs).

While the effects of tobacco on heart health are well known, knowledge among the public that tobacco is one of the leading causes of CVD is very low. The figure below from WHO’s brochure shows the percentage of adults who do not believe or do not know that smoking causes stroke and heart attacks. 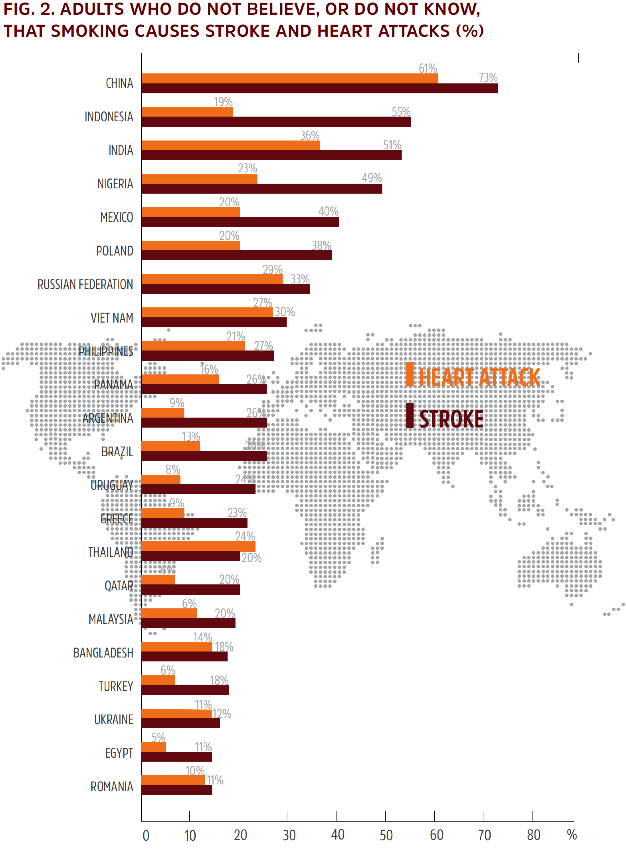 WHO and the US Centers for Disease Control and Prevention launched the Global Hearts initiative in September 2016. The initiative aims to support governments in bolstering prevention and control of CVD. Global Hearts comprises of three technical packages: a) MPOWER for tobacco control b) SHAKE for salt reduction and c) HEARTS to strengthen management of CVD in primary health care settings.

Hopefully, on this World No Tobacco Day, the governments will commit to protect their citizens from tobacco use. The truth of the matter remains: prevention and control are not sole responsibilities of governments. Health care professionals, public health agencies/staff, national/state/local governments, educational institutions, business leaders/businesses, community based organizations and community leaders all have a role in making everyday a “No Tobacco Day”.