The 2016 Global Nutrition Report, a report that assess progress towards global nutrition targets as set by the World Health Assembly,  was released in June. This annual report is the result of a comprehensive review of state of nutrition by an independent, collaborative initiative that involves a diverse set of partners.

According to the latest report a staggering one in three of us suffers from malnutrition. Malnutrition is defined as “lack of proper nutrition, caused by not having enough to eat, not eating enough of the right things, or being unable to use the food that one does eat.” The one in three number reflects a spectrum of malnutrition ranging from childhood stunting and wasting to adult overweight and obesity. Malnutrition is the number one driver of global disease burden and its occurrence tends to have a cascading effect.

In the last five years or so, there has been traction and investment into ending malnutrition. The global nutrition targets for 2025 set by the World Health Assembly include:

According to the report there is significant variations between countries in the status of meeting the global targets. Many countries have made great progress and are on track to reducing under-5 stunting wasting, and overweight, and exclusive breastfeeding of infants younger than 6 months old. Of particular importance are data that show that under-5 stunting is decreasing in most regions except in Africa and the number of children under-5 who are overweight is increasing in Asia. Despite this success, the report points out that nearly all countries are off course with respect to global targets related to reducing anemia in women and adult overweight and obesity.

The calls to action issued by the authors of this report include: 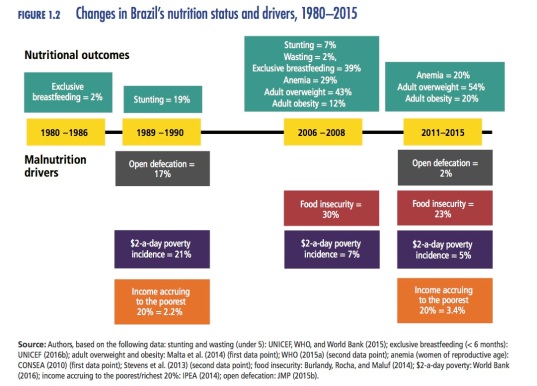 Given the large numbers of refugees and internally displaced people, the report does discuss the vulnerability of this group to food insecurity and malnutrition. The authors also call for better assessment of nutritional status in emergency settings, incorporating nutrition-sensitive interventions and improved accountability of nutrition actions in emergency contexts.

The report does not discuss malnutrition among the elderly or the complete lack of data that would be helpful in understanding the magnitude of this problem. What the report is also missing or perhaps not within its scope, is the importance of maintenance of agro-biodiversity in combating malnutrition. The loss of biodiversity and its impact on providing better nutrition for today and tomorrow is something that cannot be ignored.

You can read the report in its entirety here and let us know what you think!